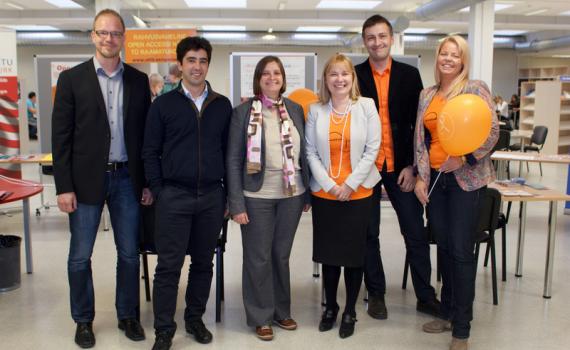 Open access (OA) has been on the radar In Estonia since 2009. University of Tartu Library was one of the early adopters of OA, joining the international community in the annual OA Week celebrations from 2010 onwards, and organizing events to initiate debates on OA and Open Research Data.

In 2010 several institutions in Estonia - including University of Tartu - had OA institutional repositories, but OA publishing was less common. There was keen interest in creating national policy that would make publicly-funded research results and data openly available; however, many researchers and students still did not understand OA principles and strategies.

In 2011, to address gaps in OA knowledge, EIFL supported a project titled ‘Institutional repository as the basis of the promotion and implementation of OA principles’. The project promoted University of Tartu’s OA digital repository, and initiated discussion on national OA policy.

From 2013 - 2017, EIFL continued to work with University of Tartu Library to launch open research data support services and to raise awareness about open research data and OA publishing, in partnership with the European Union initiatives, FOSTER (Facilitate Open Science Training for European Research) and OpenAIRE (Open Access Infrastructure for Research in Europe).

“Due to the library’s OA activities and competence, the main change that has taken place can be seen in the role of the library as a trustworthy partner to scientists, the university administration as well as funders. The library has operated as mediator in the dialogue between the different stakeholders and has reached the position where our input is considered and we can carry out different projects to help improve science.” - Liisi Lembinen, University of Tartu Library Director

Among the key strategic objectives contained in the national strategy set out by the Open Science Expert Group of the Estonian Research Council is that by 2020 Estonia’s academic community is familiar with and accepts the principles of OA.

University of Tartu Library is continuing to take the lead in open access, open research data and open science policy development, implementation and awareness raising, with two important events on the horizon: on 2-3 October 2017 Estonia is hosting the European Open Science Cloud event, and on 8 November 2017 - the Research Data Alliance (RDA) national workshop for Estonian researchers.