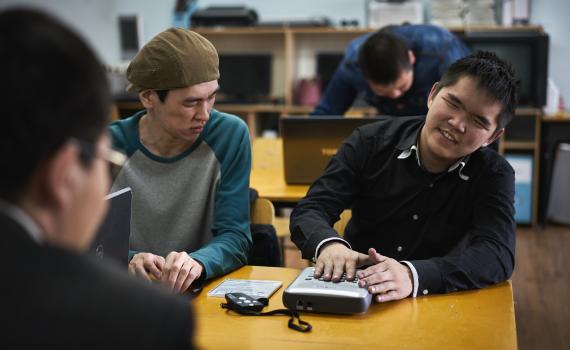 The Marrakesh Treaty for persons with print disabilities has the potential to fundamentally change the lives of the world’s 285 million blind, visually impaired and print-disabled people, open doors to knowledge and education, increase the ability to earn incomes and to participate fully in society. It does this by helping to end the ‘book famine’ - the fact that only about 7% of published works are made available globally in accessible formats, like braille, audio, large print and digital accessible formats. In the developing world, where 90% of blind and visually impaired people live, the figure is less than 1%. This problem is partly due to barriers created by copyright law, barriers that the treaty seeks to remove.

The Marrakesh Treaty, adopted by member states of the World Intellectual Property Organization (WIPO), has been in force since 30 September 2016. Now the treaty is legally binding on those countries that have ratified. Marrakesh is WIPO’s fastest moving and most popular treaty in terms of take-up by member states, reaching the milestone of 100 countries in October 2020. By the end of 2020, a total of 102 countries had joined the treaty.

The Marrakesh Treaty provides libraries with an opportunity to boost services to people with print disabilities. Libraries in every country have a long history serving people with print disabilities, and are one of the primary sources of accessible reading material. And under the treaty, blind people's organizations, libraries and other such entities can engage in cross-border sharing of accessible format materials.

EIFL's support for the Marrakesh Treaty

To address the barriers created by copyright law, and to alleviate the acute shortage of books for millions of blind and visually impaired people in developing countries, EIFL actively supported negotiations over five years at WIPO in Geneva, and participated in the Diplomatic Conference in Marrakesh that adopted the Marrakesh Treaty in 2013. Since then, EIFL has been working hard to encourage its ratification and implementation in partner countries, raising awareness among librarians and policy-makers, supporting advocacy campaigns, organizing seminars, responding to government consultations, developing multi-lingual guides, and providing technical assistance.

EIFL advocacy has contributed to 20 countries joining the Marrakesh Treaty, benefiting an estimated 37 million people who are blind and visually impaired*. It continues to engage with partner countries to encourage ratification and implementation of the treaty into national law - twenty-three copyright laws have been reviewed with recommendations for implementation. With major content-producing countries on board, EIFL is committed to ensuring that people in developing countries, where the majority of blind and visually impaired people live, can fully benefit from the treaty.

* Bourne R, Steinmetz J, Flaxman S, et al., Trends in prevalence of blindness and distance and near vision impairment over 30 years: an analysis for the Global Burden of Disease Study. Lancet Glob Health. 2020. Accessed via the IAPB Vision Atlas. People living with perceptual impairment such as dyslexia, and physical disabilities that prevent them from holding or turning the pages of a book, also benefit from the Marrakesh Treaty. Global statistics for these beneficiaries are not available.

How a WIPO treaty for persons with print disabilities can change lives - testimonies presented at the WIPO Diplomatic Conference that adopted the Marrakesh Treaty (2013).

Imagine being able to easily get accessible materials from other countries, that would be a dream. It would spur other students in Lesotho to study and lead fulfilled lives. It will assist the real efforts of the government of Lesotho to promote the participation of people with disability in society.
Nkhasi Sefuthi, Human Rights and Advocacy Officer, Lesotho National Federation of Organisations of the Disabled (LNFOD)
Copyright and Libraries Programme