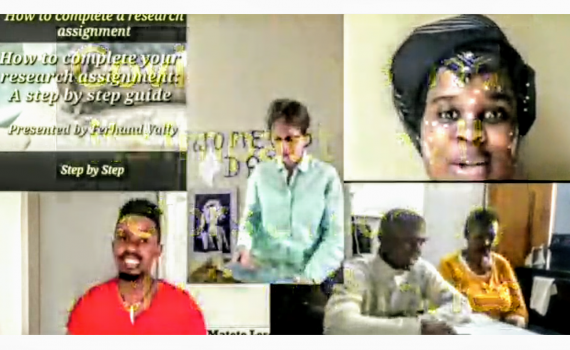 When City of Johannesburg Libraries in South Africa went into lockdown on 27 March 2020, millions of regular users of its network of 89 public libraries across the city were suddenly deprived of free access to books, newspapers and magazines, computers, Wi-FI internet, literacy classes and ICT and e-literacy training. They also lost social opportunities: storytime for children, social gatherings for seniors, study groups.

Librarians were faced with a challenge. What services could they provide, and how? Going online was an option, and City of Johannesburg Libraries - popularly known as Joburg Libraries - has a Facebook page that is used to communicate services and events. Joburg Libraries also runs a network of eLibrary classes with a busy in-person eLearning and ICT training programme for all age groups.

The eLibrarians’ team came up with an innovative idea - conducting services through video programmes and sharing them on Facebook.

The eLearning office put out a call to eLibrarians inviting them to participate. “Our eLibrarians were working from home. As many had duties that they could not perform online they had time to learn something new and contribute to service development. Several expressed interest, and we were able to create a group of eLearning champions,” said Jeff Nyoka, who manages Joburg City Libraries’ eLearning Programmes.

The eLearning champions set out to convince more librarians to join - and soon 40 had signed up. They compiled a list of topics for a series of videos to be posted to Facebook, and the eLibrarians provided training in video skills: lighting, voice projection, building an online personality and preparing a script. Librarians who were more interested in video editing were encouraged to download and learn to use free video editing apps.

THE LIBRARIANS MOVE INTO ACTION

“The librarians immediately went into production mode using their own equipment at home - smartphones, tablets, or laptops, and their own wifi or data. We drafted a daily schedule for showing videos on different topics and we were able to launch the series very soon after lockdown began,” said Jeff.

On Tuesdays and Thursdays there was storytelling for children, including special features on South Africa’s different cultures and languages. Children were filmed reading from books or e-readers, and also wrote and read their own stories. eResources Wednesdays featured educational materials and useful databases of open access resources. On Fridays, ‘Ask-A-Librarian-How-To’ featured skills like how to compile a bibliography and how to use a dictionary. There were videos on computer coding; e-literacy skills; job seeking; mobile literacy tips for seniors, and much more.

The Facebook video series attracted tens of thousands of viewers. Videos focusing on the use of technology, e-literacy and e-resources were viewed over 65,000 times from April to December 2020. Digital storytelling videos were viewed almost 20,000 times. Joburg Libraries’ Facebook fan-base grew by 75%.

“I gained extensive knowledge from the Joburg Libraries Facebook page. One of the recommended websites and apps I found helpful was the Fundza Literacy app which allowed me to read and even write stories and articles which could be published online. This website and many others from their page helped make lockdown a little more fun," said Zanele Mndaweni, aged 17.

In June, to celebrate South African Youth Month, Joburg Libraries organized a ‘Digital Skills for Senior Citizens’ competition in which young people were invited to submit videos showing how they were teaching senior citizens to use digital technology. The videos had to show the young people’s teaching skills, and what the seniors had learnt. Winning videos were posted to the library’s Facebook video series as examples of good training practice by young people.

“I have learnt from Karishma, my niece, how to keep up with what is going on throughout the world on a daily basis using newspaper and social media apps that she has helped me to download. I no longer have to purchase a newspaper. It has made my life much easier and I’m becoming accustomed to the modern ways of reading the newspaper,” said Mr E. Cassimjee, whose niece, Karishma, was one of the winners of the competition.

INSPIRING OTHERS AND WINNING RECOGNITION

The lockdown video series inspired replication, and Joburg Libraries became the go-to place for advice and guidance: “Johannesburg City Department of Arts, Culture and Heritage consulted us, and librarians from Ekurhuleni Municipality came to us for advice about video production,” said Jeff.

LIASA (the Library and Information Association of South Africa) invited Joburg Libraries to give a presentation on the lockdown video series during the LIASA virtual conference in November 2020. IFLA (the International Federation of Library Associations and Institutions) included information about the service on a web page showcasing good examples of library services offered during the pandemic by libraries from around the world.

“Joburg Libraries has managed to continue essential services when other institutions like schools, universities and bookshops have been closed. The videos have shown communities that libraries can rise above lockdowns, and continue to play a central role in their lives,” said Jeff.

Read about more public libraries that respond to COVID-19.