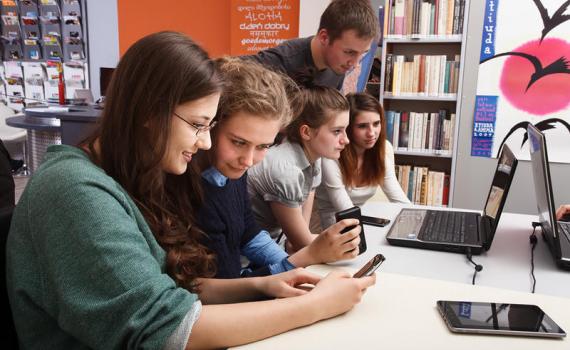 In 2013/14 librarians conducted focus group research with high school students in Piekary Slaskie to learn about their technology skills needs and interests. The research found that the students were using computers and smart phones in limited ways, mostly to communicate with friends on Facebook and to play games. However, the students wanted to learn more – but “not in a boring school-like way”.

Guided by these findings, librarians developed the ‘Programming of Curiosity’ service.

In 2014, with a small grant (up to US$20,000) from the EIFL Public Library Innovation Programme (EIFL-PLIP), the library created a special ITLab where young people have free access to computers, a 3D printer, robotics kits and graphic design and computer coding software.

In less than a year, the library –

The library is now widely recognized – in Poland and in the international library sector – as a modern, well-resourced and dynamic institution. The number of young people using the library has increased by 27% and the project attracted new partners, volunteers and donations that will help sustain and expand it in future.

The library serves the town of Piekary Slaskie in southern Poland. Serving an average of 530 users a day, the library advances community development by offering a variety of services, including access to print and e-resources, computers and the internet, technology skills training, educational workshops, foreign language courses and art exhibitions.

The robotics workshops are a hit. This is a fantastic initiative for young people, and all without fees.
Zbigniew Mastalerz, young trainee
Public Library Innovation Programme
Poland